Doc … can I get a copy of your slides?

That is one of the most common requests I field after presentations. I totally understand, as there is a lot of information there, and it can be somewhat overwhelming. However, just printing out or copying the slides winds up killing a lot of trees and does not necessarily convey all of the information in the presentation! Here, then, is all the information presented in the slides, along with some necessary explanations.

The major three points of the talk are:

All psychoactive drugs have effects both on your brain, and on your body. They include the acute period when the drug is actively working on your brain, the so-called intoxication phase, and the aftereffects of the drug as your body is slowly metabolizing or eliminating it, the so-called “hangover phase”. Depending on the drug, some of these late, post intoxication effects, can last for several weeks after your last use if you are a heavy or regular user.

In our society we are fond of classifying drugs as “soft” or harmless, versus “hard” or dangerous. This is at best foolish, and at worst deadly. There are no such things as soft or hard drugs. A drug is a drug. Some of them have more dangerous side effects, some of them have more addiction potential for certain individuals than others, but these are relatively minor points. If you are addicted to marijuana, or you are killed because of its late effects on concentration or coordination, it is scarcely a “soft drug”. Some people take cocaine and don’t become addicted. Does that make it a “soft” drug?

There are two very different groups of people in society, and educators often do not explain which group they are discussing when they are talking about psychoactive drugs. The first group, comprising about 90% of people, are not addicted. They may be impaired, and they may be killed or injured as a result of their impairment, but they can still make choices about when, where, and how much they use. The remaining 10% have lost those choices and have become addicted to their drug, or drugs of choice. They tend to suffer more long-term harm in terms of brain damage and body damage, and they tend to be impaired for longer periods of time. They are usually unaware that they have a problem. There is only one response to addiction and that is to stop using all psychoactive substances permanently. At the end of these notes I reprint the explanation of addiction, recovery, and freedom of choice as written by Cpt. Lyle Prouse, one of the NorthWest Airlines pilots jailed for flying under the influence of alcohol. It is one of the best explanations of addiction “from inside the belly of the beast” that I have ever read.

The following are some of the facts and figures which interest most audiences and appeared in the slides: 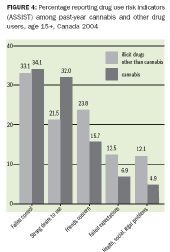 If you decide to prescribe marijuana, you need to ensure your complete compliance with the complex regulations outlined by Health Canada.

“Chronic marijuana use is associated with increased cerebrovascular resistance through changes mediated in blood vessels or brain parenchyma. These findings may provide a partial explanation for the cognitive deficits observed in a similar group of marijuana users.”

Does Marijuana cause lung cancer?

My name is Lyle Prouse and I was the infamous Northwest Airlines Captain back in March of ‘90 who was arrested on Northwest Flight 650 (FAR-MSP) for flying drunk, along with the copilot and second officer.

Subsequently, I was fired by NWA, stripped of my flight certificates, and lost my medical due to alcoholism. I became a national pariah, was sent to federal prison for 16 months, served 14, and went broke within 30 days of the arrest. Furthermore, the trial judge put sanctions on me to insure I’d never fly again due to my age (51 at the time).

I want to be clear about a number of things. First, I make no excuses, I accept complete responsibility, and I openly acknowledge that everything that happened to me was fair and appropriate. Period.

Having said that, let me turn to some of the comments offered by a number of pilots in this forum. Some of those comments indicate some knowledge and understanding of the subject of alcohol/alcoholism and some indicate ignorance bolstered by arrogance.

When I talk about alcoholism I separate the issues between the acts and behavior (and the consequences that flow from that) - and the disease itself.

Being an alcoholic does not relieve me of responsibility for what I do nor does it grant me any immunity or excuse anything. Anytime I commit an unlawful act, alcoholic or not, it’s incumbent upon me to accept the consequences of that act.

It should be noted that while alcoholism is not an excuse for behavior it very clearly explains a lot of it in the case of the alcoholic. It might surprise some to know that since I got sober over 16 yrs ago I’ve never flown drunk or received a DUI… Nor have I done any of the shameful, disgraceful, offensive, and embarrassing things that drunks routinely do.

One of THE first steps of recovery demands acceptance of personal responsibility and being accountable. So the talking heads, Bill O’Reilly for one, who declare that the only reason for treating alcoholism as a disease is so those with it can escape responsibility, is absurd beyond words. Those ideas only come from non-alcoholics…in my experience.

I have been sober since the date of my arrest, over 16 years and some nine months now. I am active in recovery, speak all over the United States and Canada (for free, of course), have been involved with virtually every major airline in their alcohol programs. I am of Native American heritage and I’ve spoken on reservations in the US and Canada, and at Native American sobriety conventions.

I served out my prison time, came out broke and disgraced, and eventually earned back each of the four licenses I needed, commencing with the private and doing it, quite literally, from the ground up…after the judge miraculously lifted the sanctions on me. I did it the same way I stay sober, one day at a time, one thing at a time, one step at a time, and one license at a time.

I’d never had a private license - I came out of the Marine Corps as a Vietnam vet and quickly acquired a Com’l ticket and inst rating after a quickie test…and was hired 3 weeks later by NWA (Aug ‘68). I had gone in as a barely 18 yr old private and I left 11 1/2 yrs later as a Captain and jet pilot with an excellent reputation.

Not quite four years after my arrest and imprisonment, the Pres/CEO of NWA, Mr. John Dasburg, personally reinstated me to full flight status at NWA. It was an act of personal courage on his part that the word “extraordinary” doesn’t even begin to approach.

I retired honorably at age 60, in Sept ‘98, as a 747 captain, having done all I could to fully vindicate all those who had believed in me. Additionally, the tough Minnesota judge who tried and sent me to prison suggested, as I retired, that I apply for a presidential pardon and said he’d support it even tho he’d NEVER supported a petition for pardon in his 16 yrs on the bench. Two years later I rec’d a Pres Pardon - a HUGE, life altering event for a federal felon!

To one contributor who said alcoholism is a lifetime disease and implied we who are recovering are delicately balanced on the razor’s edge and might relapse anytime, I say he is only partially correct. It is a lifetime disease, that’s why it’s called Alcohol-ISM and not Alcohol-WASM. But so is diabetes and a number of other chronic diseases. And, yes, some never make it, never recover, and never stay sober - and they die (both my parents took this disease to their graves).

But to discount the millions of us around the world who live good, productive, solid lives in recovery displays a shallow and ignorant way of thinking. And to say no alcoholic should ever be trusted in the cockpit because they might relapse is absurd. Anyone in the cockpit might keel over, have a stroke, heart attack, brain anueryism, or some other possible problem and it’s nonsense thinking to make a blanket pronouncement and condemnation of everyone based on what “might” happen.

Many don’t make it. But many don’t survive cancer, heart disease, and other calamities of life. The airlines have THE most successful rate of alcoholism recovery among any group, virtually double the norm in the rest of our society. And they do a good job of weeding out those who will not or cannot get sober - and that’s as it should be.

I’m well aware that there are those, still today, who think I should have been put against a wall and shot; and that I most certainly NEVER should have been allowed to fly again. Fortunately, I don’t think that reflects most of the heart and soul of the American character who, traditionally, support and encourage the underdog and applaud comebacks.

Alcoholism is a treatable, recoverable disease. Today there are over 3500 recovering alcoholic pilots flying for airlines. One of the leading docs I know (who’s worked in the aviation/alcoholism field for over 30 yrs) says, “When I get on the plane I glance in the cockpit. If it’s a face I recognize, I breathe a sigh of relief. If it’s one I don’t…then I sit in the back and wonder.”

To each his/her own. I doubt anything I’ve said here will change any minds and may only provoke further debate. My only purpose here is to speak the truth as I know it and do it quietly and clearly.

Being an alcoholic was something I first viewed as a disgraceful, shameful, stigmatic curse. It has evolved into the greatest thing that ever occurred to me because of what it has forced me to do. My kids won’t have to watch me die a grim, lingering alcoholic death, as I had to with my parents. My life today is geared toward giving back more than I ever took, making amends where ever possible, and being constantly grateful for the joy of sobriety and the brightness of each day.

What I have expressed here today is not something unique to me. It is shared by virtually every recovering person I know. I just came home a few minutes ago from speaking in Denver last night. As is always the case, I met people who inspire me and make me glad I was forced into a program of recovery I NEVER would have willingly accepted when I was drinking.